Someone on the social networking site Facebook described a human story to be proud of. “If this happened in Europe, I would have received thousands of words, to talk about the mercy, morals and humanity of Europeans.

He added that the story in short occurred on Monday, 2018/11/5 at 8 pm I was in the direction of buying spare parts for my car from a shop called Al-Abdul Hamid for spare parts used by artisans, and I sat waiting for the boy to bring me the piece of the store .. came someone who asks to give it Half of an old car, saying: Give me half of the old car and away this cat away and utter obscene words, the shop worker told him to wait 5 days and then come to get it until the cat recovered from her birth.

The old car buyer showed his anger at his reaction. The buyer told him that I would return to my eastern city without anything. Is this possible because of a cat born inside the car? I have drawn my attention to the conversation between the seller and the buyer, the buyer’s man said obscene words because of it. , The narrator continued his speech. “This is the story of the cat that was born yesterday in the half of the Arabic Sonnet … This is forbidden, we sell half a car and we do not want to hurt the cat,” he told me. Because the cat was born inside a car, the money went to hell. But the spirit of the cat from God and its young children is also the spirit of God, and we can not bear the punishment of God on this soul. 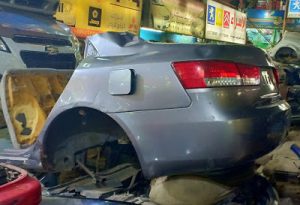 The narrator ended his speech, tears fell on my face and asked him to portray this cat as a great example of humanity followed by the rest of mankind and a message of peace for the whole world. He agreed to my request and thanked the man very much for what he did towards the cat, which is compassion and humanity that shook the throne of heaven.

This story, which I saw myself and swear to God is real, every letter I wrote is what happened .. So Egypt protected for the day of religion because people do good in a secret fills the oceans of good works ..

They spoke to the world that Egypt has a simple human being and that its education is limited and poor, but they have humanity and mercy to fill the globe, note that the text of the gray car inside the cat with her children.

A definitive way to clean the colon. and the treatment of gases and bloating in 3 days

Pain and convulsions .. The best 4 home remedies for menstrual symptoms

Learn about the benefits of breastfeeding for a long time .. Protect children from liver diseases

A definitive way to clean the colon. and the treatment of gases and bloating in 3 days

Pain and convulsions .. The best 4 home remedies for menstrual symptoms

Learn about the benefits of breastfeeding for a long time .. Protect children from liver diseases